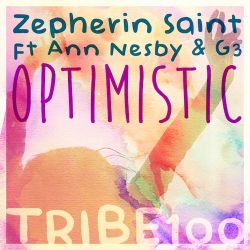 The wonderful ‘Optimistic’ from the fabulous SOUNDS OF BLACKNESS is one of soul’s true anthems. Released back in 1991, it’s still a mainstay in every proper soul jocks’ set while even a quick listen will always cheer you up… keep you optimistic even!

Fast forward now to the present and to top UK dance label TRIBE RECORDS. The label – headed by ZEPHERIN SAINT – is all set to issue its 100th release and Zeph wanted something very, very special for the anniversary.

Zeph says; “‘Optimistic’ is one of my all time faves. It helped me through a difficult time in my own life, as I am sure it has for many when it was originally released. It’s always been on my mind to make a house cover as I would sometimes play the original in my DJ sets to close the night, but I did not feel I was ready until now. The words and sentiment of the song create a lot of emotion on the dance floor, so when thinking of how we were going to commemorate Tribe’s 100th release, this just made perfect sense on many levels.”

And lo and behold…’Optimistic’ IS Tribe’s 100th release and guess what…. they’ve managed to get the song’s original singer, ANN NESBY, to do the vocal! Ann’s in tremendous from and her energized attack perfectly matches the sharp, tight beats that the Tribe crew cook up. It’s as if time’s stood still and listen hard and you can just hear a little repetitive sample from the original.

Something very magical has just got even more magical!

‘Optimistic’ feat. ANN NESBY will be released on October 5th 2015 on Tribe Records.