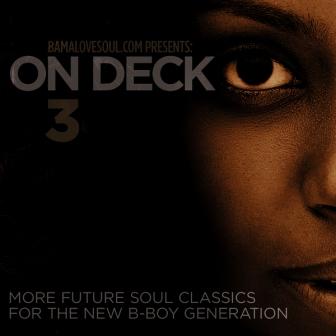 Down in Birmingham, Alabama one of the most popular radio shows has long been DJ Rahdu’s ‘Diamond Soul Xxxperience’ which focused on neo-soul, new wave hip hop and general underground soul. The show was so popular that Rahdu (aka Roderick Moody) began releasing compilation albums under the BamaLoveSoul name and tying it all in with a similarly named website.

The team have just released their third such long player – ‘On Deck 3′ and it has just been issued in Europe via bbe Records. The series’ mission statement is to present music that is “a haven from R&B/AOR mediocrity” and listening through the 15 tracker they’ve clearly succeeded.

The album offers all kinds of everything. There is plenty of neo-soul, of course; that’s where Rahdu started off and amongst the best offerings here is ‘Not Enough’ from Renee Dixon. Conscious hip-hop… try ‘Alive’ from Waju and Garimastah Featuring Muc J – a gentle insinuating piece that might even please the committed anti-hip-hop brigade.

There’s also a smattering of new age jazz (Sean Haefeli’s vocal on ‘Essential’ is provocative and unusual) along with some experimental soul that the blinkered crowd will sadly dismiss. They really should give ‘Help Me’ from Saturn’s Child or the lengthy dancer ‘When I Call’ from Salah Ananse a chance. That last one’s built around some great beats.

‘On Deck 3’ isn’t an easy listen and there’ll be cuts here that won’t appeal to everyone. Equally, though, if you like experimental soul from artists prepared to push the limits you could do worse than investigate.

ON THE DECKS 3 is out now on bbe RECORDS