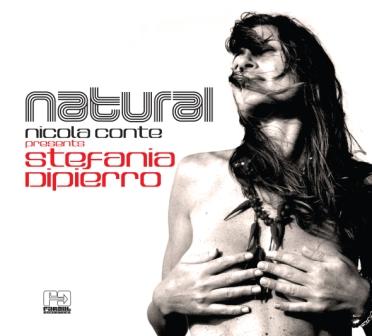 ‘Natural ‘ is the latest musical collaboration between Italian jazz guitarist/DJ/producer/and all round good guy NICOLA CONTE and his muse, STEFANIA DIPIERRO. The pair first worked together in 90s music collective, Fez before Ms Dipierro took off to offer her sensuous vocals to a number of other Italian bands. Mr. Conte, of course, went on to forge a great solo career as a producer and music facilitator. He even found time to produce a handful of tracks on Stefania’s best selling ‘Jet Sounds’ album.

Last year the couple decided the time was right for another full-on collaboration and the end result is the lovely, light ‘Natural’ 14 tracker. Already winning air play across Europe, the set is sensual and sumptuous with the prevailing soundscape anchored in the traditions of Brazilian bossa nova, samba and jazz…. the perfect antidote to wet, cold, drab and yes… miserable Northern European winters!

The musical menu is a well-chosen mix of originals and covers with the gentle, jazzy take on Oscar Hammerstein’s ‘Softly As In A Morning Sunrise’ a standout. Jobim’s ‘Caminhos Cruzados’ is another album highlight as is a version of Jorge Ben’s sensual ‘Que Maravilha’.

It would be churlish, however, to cherry pick. ‘Natural’ is about an atmosphere, a feeling, an ambience. Like the great albums of the Gilbertos, Sergio Mendes and Jobim himself all you need to do is sit back and enjoy the effortless, rhythmic sensuality of it all.

NATURAL by NICOLA CONTE and STEFANIA DIPIERRO will be available on Faro Records from March.