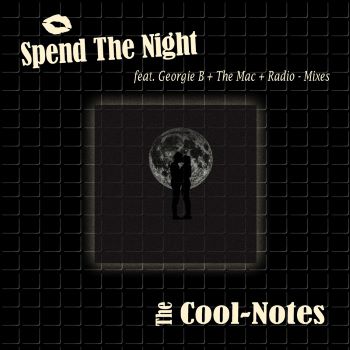 The COOL-NOTES, from South London, started their career back in the mid 1970’s  as a reggae band. Over the years they became major players on the Lovers Rock scene. You may remember their ‘You Are What You Are’ and ‘My Tune’.

In 1983 the Cool Notes changed tack and embraced soul, scoring big hits with ‘You’re Never Too Young’ and  ‘I Forgot’ while a catchy tune called ‘Spend The Night’ just missed the UK top 10.

By the 90s the original band had been trimmed down to a trio. Steve McIntosh, Heather Harewood are the main members with Joe Francis working alongside them in the studio. The streamlined Cool Notes  are currently working on a new album. However, the project has hit all sorts of delays because of the damned pandemic so to sort of speed things up a little Steve McIntosh decided to resurrect  the aforementioned ’Spend The Night’ and remix it. What he came up with is a “Freedom Mix” because, he says: “Everyone who loves music  just can’t wait to get out of the confines of the last miserable 14 months or more of being locked indoors and party their lives away and hopes they might be dancing to the Cool-Notes new mixes.”

This new “Freedom” ‘Spend the Night’ is deep into soulful house territory – fast and frantic, it’s sure to fill floors when we get the opportunity! For those who like things a little more sedate, may we suggest a second new mix of the song. This so soulful tweak  comes courtesy of ever dependable and oh so busy, George B of the Groove Association and he crafts a wonderfully sensual retro groove that’s sure to set feet tapping and faces smiling. It’s real good time, classic soul built around a sample from Gwen McCrae’s ‘Funky Sensation’. The original ‘Spend The Night’ has long been a Georgie B favourite and he didn’t hesitate when given the opportunity to remix it.

Both mixes of ‘Spend The Night’ are out now but are available only from the Cool Notes website: www.cool-notes.co.uk