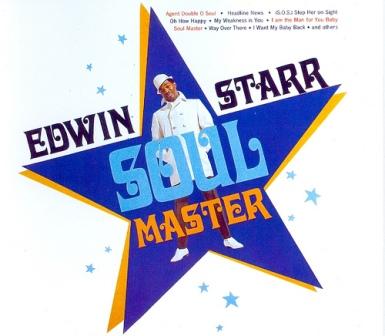 EDWIN STARR (born Charles Hatcher in Nashville in 1942) is a proper soul legend. In the mainstream he’s known for his barnstorming hit ‘War’ but the soul cognoscenti revere him for his earlier work – classics like ‘Agent Double-0-Soul’, ‘Backstreet’, ‘Headline News’ and ‘Stop Her On Sight’.

Starr/Hatcher began his music career in Cleveland with a band called The Future Tones then after military service he joined Bill Doggett’s band. In 1965 he signed a solo deal with Detroit indie label Ric Tic where he enjoyed his first hit with ‘Agent Double-0-Soul’. This was quickly followed by ‘Stop Her On Sight’ and the success of Starr was one of the reasons that encouraged Berry Gordy to buy out Ric Tic. Starr was therefore welcomed into the Motown fold.

At Motown Starr continued his run of his with energised classics like ’25 Miles’ and ‘I Am The Man For You Baby’ while his song ‘Oh How Happy’ was successfully covered by other hit makers (notably the Shades Of Blue). As the hits eventually dried up Edwin was teamed with Norman Whitfield (then hotter than hot with the Temptations) and just as Whitfield had changed the sound of the Tempts, he reinvented Edwin Starr – the result being the worldwide smash ‘War’.

In 1975 Starr left Motown and he eventually reinvented himself a second time – as a disco artist, enjoying hits like ‘Contact’ and ‘H.A.P.P.Y. Radio’. In the 80s he relocated to the UK where he became a mainstay of the Northern soul circuit with a reputation second to none based on those wonderful early Ric Tic sides.

Edwin Starr sadly died in 2003 but his musical legacy is tremendous. Reissue label bbr have just released two remarkable Edwin Starr albums which allow everyone to enjoy the most important parts of that legacy – his Ric Tic and Motown recordings.

The first release is a hugely extended version of Starr’s 1968 ‘Soul Master’ album. The set contains all his early hits – including the Ric Tic recordings and – most importantly –the instrumental versions of ‘Backstreet and ‘Agent Double-0-Soul’ which did much to cement his Northern reputation. The second album is an extended version of ‘Involved’ which brings together Starr’s work with Norman Whitfield. Together they give you everything you really need to know and have on Edwin Starr… like we said up top, “a proper soul legend”.