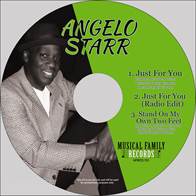 UK soul fans know all about ANGELO STARR – brother of the late, great Edwin. For many years while Edwin was living and working in England, Angelo was a key member of “The Team”, Edwin’s band. Then when Edwin sadly died in 2003, Angelo took over the leader’s mantle.

Born in Ohio, USA, Angelo and The Team have performed at some of the top venues throughout the world including New York’s Madison Square Gardens, London’s Royal Albert Hall and Wembley Arena. Angelo has also worked with people like Alexander O’Neal, The Funk Brothers, Chaka Khan, Ronnie Jordan, Gwen Dickey’s Rose Royce, Shola Ama and most recently he’s collaborated with Lemar.

Back in 2009 he and The Team released the well-received ‘Keeping The Faith’ album and for the last several months Mr S has been working on a new solo album… which is heralded by the release of the first single ‘Just For You’ on November 27th on Music Family Records.

The song is a sultry ballad that builds to an emotional climax while marrying elements of both the old and new school traditions. The B side, ‘Stand On My Own Two Feet’, is an Ian Levine production, so little wonder there’s a feel of classic Motown about it!