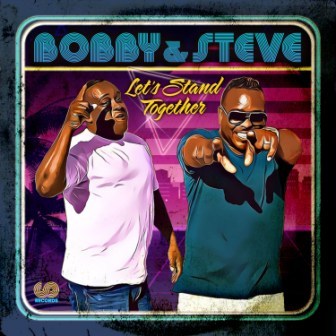 London twins BOBBY and STEVE are bona fide UK soul and dance icons. The East Enders have been making and presenting their kind of music (their heritage is the music of people like Teddy Pendergrass, Loose Ends, Leroy Burgess, Barry White, McFadden & Whitehead and Thelma Houston) since the mid 80s and they’ve played out everywhere that is anywhere! They made their vinyl debut in 1992 when ‘Love’s Got A Hold On Me’ was signed to Simon Dunmore’s Cooltempo label and the duo were also behind the long running Kiss FM radio show Zoo Experience where their eclectic musical collection won them huge audience figures.

Now the boys return to the dance fray with a new album that’s stuffed with their signature soulful house sound. ‘LET’S STAND TOGETHER’, they say, “offers a glimpse into our hearts and minds, offering a musical journey that will lift your spirits, fill your hearts and move your feet.” Well, it will certainly do the latter… each of the 14 cuts is carefully and lovingly crafted to fill floors. Helping B&S deliver is a slew of big genre names…. people like Byron Stingily, Barbara Tucker, Duane Harden, Stephanie Cooke, Jean Carne and Leroy Burgess to name just a few.

Some of the tunes will be familiar –like the LP’s title cut – a huge, sweeping take on the McFadden & Whitehead classic, fronted here by Michelle John & Lifford. Most familiar tune though has to be Jean Carne’s ‘Was That All It Was’. Not sure whether this is the original lead vocals but the brothers give the track a sweeping makeover aided and abetted by Nigel Lowis who knows more than a thing or two about the Philly sound!

And speaking of Mr Lowis he’s also at hand on the set’s lead single…a re-working of the boy’s 2001 outing ‘You Will Survive’ featuring Johnnie Fiori on vocals. Originally released on vinyl only, way back in 2001 on their Zoo Groove Stereo label, this Philadelphia inspired production (check the lovely strings!) is sample free and has been replayed by Nigel Lowis who, as ever, captures the vibe… no wonder the mix is dubbed “the Philly Vibe” mix.

Both the single and the album are available now on Groove Odyssey Records via Traxsource.