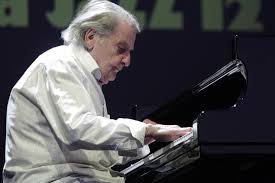 Acknowledged as the elder statesman of British jazz, Stan enjoyed a seven decade career but is maybe best remembered for his 1963 jazz suite that was inspired by Dylan Thomas’ sound play ‘Under Milk Wood’. For many years, Tracey was also the resident piano player at London’s Ronnie Scott’s Club where he accompanied dozens of jazz legends.

Stan also received a host of awards during his career, including the first Ivor Novello award for jazz in 2012; Tracey was awarded an OBE in 1986 and he became a CBE in the 2008 New Year Honours list. The musician was also awarded a lifetime achievement award at the BBC Jazz Awards in 2002 and made appearances on Later… With Jools Holland.

Despite advancing years Stan Tracey never stopped working. He was nominated for the Mercury Award in 1993 for his long player, ‘Portraits Plus’, and his last album was released earlier this year.