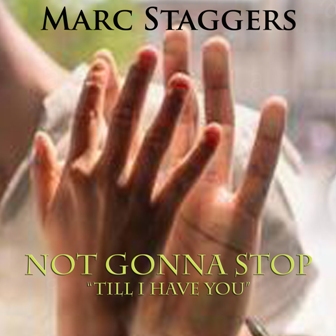 Fans of US soul man MARC STAGGERS have got plenty of new material on him to enjoy right now. The DC native, you may remember, began his professional career in gospel before he enjoyed success in Luther Vandross tributes. His warm velvet toned voice and delivery bear an uncanny resemblance to dear old Luther and for some time now that beautiful voice has helped Marc carve out his own successful niche in the modern soul world.

At the moment, Marc is working on a new album with Grammy nominated music producer Herb Middleton. The set is ‘It’s Not Lost’ and it’s due later in the year. While we wait Marc and Herb have released the first single … a lovely ballad ‘Surrender’. It’s classic Marc Staggers – smooth, sophisticated and soulful. The release’s putative B side, though, is very different. ‘Not Going To Go’ is a throwback to the golden days of the 60s… an up-tempo Motown pastiche no less. The cut boasts tight and crisp out on the floor beats, a bouncing bass line and cooing harmonies in the manner of the Four Tops ‘Baby I Need Your Loving’… though it’s a faster song than that. Both tracks are out now.

Also available now is another Marc Staggers double A sider from DSG Records. The lead cut is a version of Burt Bacharach’s ‘What The World Needs Now’. The fresh mix and production come courtesy of Nigel Lowis and the pair don’t stray too far from the version that Luther Vandross recorded back in 1994 on his ‘Songs’ album. Not a bad thing and so apposite for the situation we’re now in! The “other side” is ‘Where Are You Now’ – another classy slice of sophisticated soul that might recall people like Leroy Hutson and/or Willie Hutch. Out now.