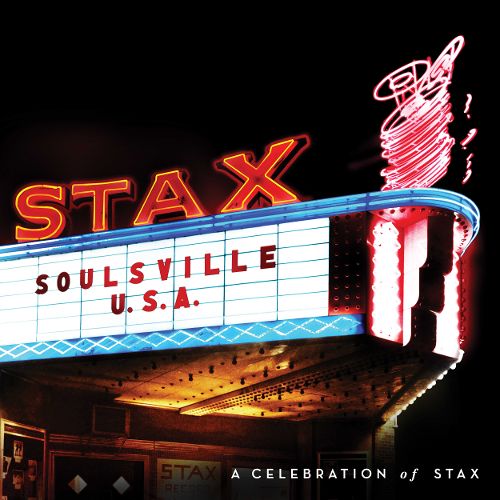 ‘SOULSVILLE USA – A CELEBRATION OF STAX’ is a chronological survey of the Stax output. It begins with the Veltone’s 1959 tune- the doo-wop flavoured ‘Fool In Love’ and ends with Shirley Brown’s gorgeous 1974 outing ‘Woman To Woman’.

In between you get all the big hitters and a selection of some of their biggest tunes alongside some lesser known names like Mabel John, The Temprees, Linda Lyndell and the Astors with their crazy but wonderful ‘Candy’

The sleeve notes tell us that over its lifetime Stax issued just over 800 singles and of those 243 made the charts in one way or another. Quite an achievement!

Interestingly one release that failed to chart was the aforementioned Veltones’ ‘Fool In Love’. It heads off this collection because it was Stax’s first proper R&B release and enjoyed the catalogue number Satellite 100. Indeed it was released on Estelle Axton and Jim Stewart’s pre-Stax imprint, Satellite and was produced by Chips Moman and recorded in Brunswick, Tennessee ( 20 miles north east of Memphis). ‘Fool In Love’ was licensed to Mercury and though it failed to chart it brought Stewart and Axton to the attention of a certain Rufus Thomas who had his daughter, Carla sign to the label. At the same time Moman convinced the label owners to move back into Memphis. Then a hit in the shape of Carla Thomas’ ‘Gee Whiz’, a name change to Stax (after threatened legal action from another Satellite label), a distribution deal with Atlantic and the rest is history …that history’s all here in this wonderful collection