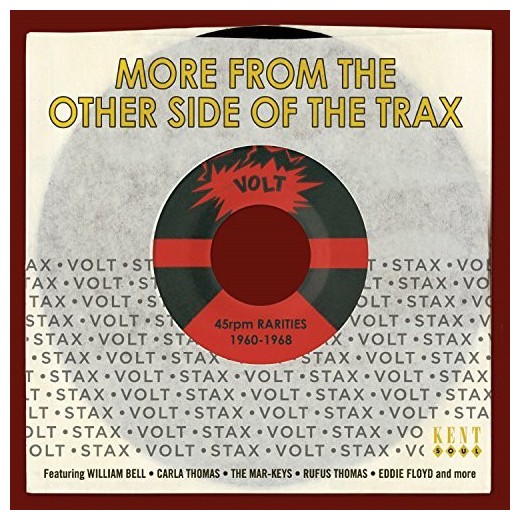 Over the years reissue specialists ACE RECORDS have done a marvellous job curating the STAX back catalogue…. they’ve reissued most of the label’s iconic albums, issued single artist retrospectives and released countless themed compilations from the Memphis label. Maybe the most impressive release though has been ‘The Compete Stax-Volt Singles 1959-68’ box set that was issued back in 1991. It was a remarkable piece of work. However hardcore southern soul collectors lodged a complaint. They claimed the box, in fact, was not “complete”, since, yes it did contain the A sides of every Stax single from that period, but it only featured a few selected B sides!

To remedy the problem, Ace (via their Kent) imprint released ‘The Other Side Of The Trax’ which cherry picked a selection of those “neglected” B sides. That’s now followed by ‘More From The Other Side Of The Trax; Stax-Volt 45 RPM Rarities 1960-1968’. That long winded title heralds a set of another 24 B sides from Stax’s legendary “Blue period”… many reissued for the very first time.

The chosen artists come from right across the Stax roster while date wise the whole Blue period is covered. Amongst the Stax stalwarts are William Bell, Eddie Floyd, The Mar-Keys and Rufus Thomas whose ‘Fine And Mellow’ shows what an accomplished singer he was… it’s very different to the novelty dance songs he’s best known for!

Amongst the lesser known names are the mixed race group, The Premiers, studio band The Triumphs (led by Chips Moman) and The Four Shells whose ‘Reputation’ was one of the very few Stax/Volt sides licensed from an outside source. In this case, Jerry Butler’s Conlo label. The as-expected excellent sleeve notes will tell you an awful lot more. The album’s out now.