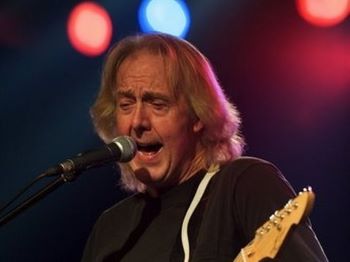 British musician, SPENCER DAVIS died on Monday, 19th October. He was 81 and was being treated for pneumonia. Davis, of course, will be best remembered for his seminal 60s band the Spencer Davis Group.

Born in Swansea in 1939, Davis moved to London before relocating to Birmingham. En route he developed a passion for the blues and learned guitar and harmonica. His first band was called the Saints (Bill Wyman was briefly a member) and he also worked with Christine Perfect/McVie (later of Fleetwood Mac). In 1963 he put together a new band – the Rhythm & Blues Quartette. The other members were the Winwood brothers (Steve and Muff) and drummer Pete York. By mutual consent they changed the name to the Spencer Davis Group. (Davis was the oldest and was known to be adept at handling the media and the business side of things). With a love of blues and embryonic soul, the band soon won an enviable reputation on the 60s club scene. Oddly, singer Steve Winwood was too young to legally enter many of the clubs they worked in! Indeed, Winwood’s position as lead singer often caused confusion because the band’s marquee name was Spencer’s!

A record deal with Island led to the group’s first album. Imaginatively called, ‘Their First LP’, it is a beat era classic stuffed with wonderful blues and soul covers like the Coasters’ ‘Searchin’’, Rufus Thomas’ ‘Jump Back’, John Lee Hooker’s ‘Dimples’ and Brenda Holloway’s ‘Every Little Bit Hurts’. Even Motown purists admit that the Spencer Davis/Steve Winwood version is every bit as good (better?) as Holloway’s original.

The band eventually enjoyed some massive hits – notably ‘Keep On Running’ and ‘Somebody Help Me’ , till the inevitable happened and Winwood quit to pursue a different career path – first with Traffic and then as a solo star. Without the younger Winwood, the Spencer Davis Group lost momentum though they continued to play live and record though their output was now more whimsical – as was the way of the late 60s!

Davis led severaldifferernt incarnations of his eponymous band and eventually found a niche playing jazz and blues in and around Birmingham where he was a mainstay at that city’s jazz festival. Festival organiser Jim Simpson said: “Spencer was a lovely man – always very courteous and a purist about music. The Spencer Davis Group stuck more to the blues and never became a fully-fledged rock band. Spencer was scholarly and well educated, very gentle and kind and his tastes in music were spot on.”

Spencer Davis is survived by his long-time partner June, and three adult children.