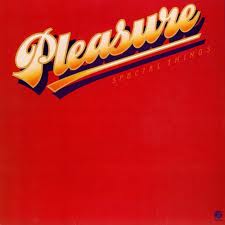 The latest release in Ace/BGP’s funk n’ jazz classics reissue programme is PLEASURE’S 1990 ‘Special Things’ , the Portland group’s final album for Fantasy. Pleasure had come to the label with a recommendation from Grover Washington Jr and their first LPs were produced by Wayne Henderson. They cut three albums with the one-time Crusader but for their fourth album they went their own way and changed direction – adding more synthesisers to their horn-heavy sound.

They’d refined that “new” sound for ‘Special, Things’ and the LP yielded club classics like ‘You Are My Star’ and ‘Law Of The Raw’. However the album failed to make much commercial impact and the band eventually had a reshuffle – moving onto RCA, though leader, Marlon McClain stayed with Fantasy to record an solo set that went on to become an underground favourite.