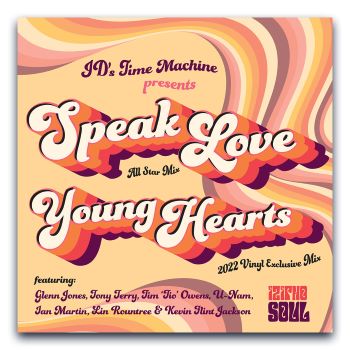 Day fans will recognize both titles. ‘Speak Love’ first appeared on James’ 2009 album ‘Natural Things’ and it also became available in a number of different mixes. Clearly Mr D knows a good tune when he has one! Now fast forward to 2017 and the cut reappeared  in a new “All Star” mix – the stars being Glenn Jones, Tony Terry, Tim ‘Tio’ Owens, U-Nam, Ian Martin, Lin Rountree & Kevin Flint Jackson. This is the mix that appears on the putative A side of the new Izipho 7” – its first outing on vinyl. But vinyl, Cd or digital – it’s just a fab, heart-warming modern soul sound.

Ditto, ‘Young Hearts’. This lovely tune dates from 2013 and features the majestic vocals of both Kevin Flint Jackson and Tim ‘Tio’ Owens. The track has been given a new and “exclusive” vinyl mix with subtle changes in the original arrangement.

This wonderful double A sider – ‘Speak Love’/ Young Hearts’ is released on vinyl via Izipho on 21st April. The edition is limited to just 300 copies and  you can learn more @ https://www.iziphosoul.com/ . If we had  a “Record of the Week” – this would be it!