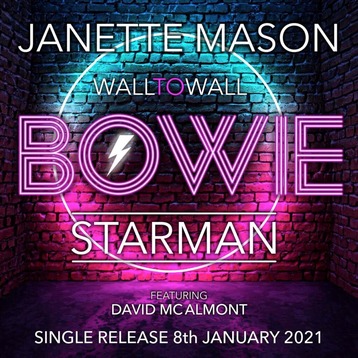 Flame-haired British pianist Janette Mason has announced that she’ll be releasing a new single on January 8th; a radical revamp of David Bowie’s iconic 1972 hit ‘Starman.’ The song’s release coincides with the late “Thin White Duke’s” birthday and is the first of four Bowie covers that the London-based pianist is set to release during 2021; they will be collected on a five-track EP, Wall To Wall Bowie, scheduled for a June 2021 release.

More subdued but no less compelling than the Bowie original, ‘Starman’ is transformed into a slow-building acoustic ballad. Its focal point is the magnetic performance of guest singer David McAlmont, whose expressive vocals are initially whispered before soaring soulfully over Mason’s sparse but elegant piano chords and Tom Mason’s elastic bass lines.

Deeply influenced by Bowie as a child, Mason is a highly respected UK musician who has worked as musical director of London’s Hideaway Club since 2012. She has performed with pop stars (Seal, k.d. lang and Oasis), has produced and arranged for jazz singers Lea DeLaria and Ian Shaw, and composed soundtrack music for both TV (Sex And The City) and film (Ruby Blue). She’s released four albums under her own name (the most recent being 2018’s Red Alert) and is currently working with  Bowie producer Tony Visconti and ex-Spiders Of Mars drummer Woody Woodmansey as part of the acclaimed supergroup, Holy Holy.

Janette Mason’s ‘Starman’ will be available as a digital download from https://bit.ly/Starman_JMason on Friday January 8th.