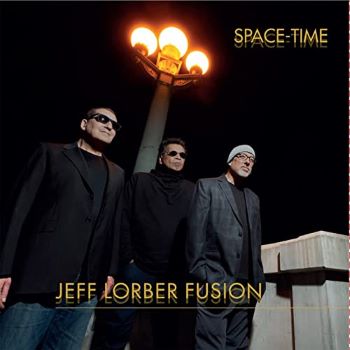 For his latest ‘Fusion’ outing, JEFF LORBER has brought on board  some stellar names to help him deliver his mew set, ‘Space-Time’… a concise 11 tracker that confirms Lorber’s position as one of THE current eminent keyboardists. Helping out here are his core drummer and bassist  Gary Novak and  Jimmy Haslip, alongside Hubert Laws, Bob Mintzer, Paul Jackson Jr., and Gerald Albright.

Lorber says that the album title was inspired by his affinity for science and physics. He says: “With all the recent chatter about Government confirmed UFO sightings and potential extra-terrestrial life. If there are aliens, they are probably watching ‘I Love Lucy’ right now and maybe jamming to early Miles Davis and John Coltrane or listening to some Sun Ra!” So, why not jam to Jeff Lorber too? Hence the concept of the album title and that title track kicks off proceedings. It’s a bright, breezy, slick and sparkling affair – a sound revisited throughout the album. ‘Back Room’, ‘Curiosity’ and ‘Truth’ offer more of the same.

Amongst the focus tracks is the band’s homage to Chick Corea. It’s simply called ‘Chick’ and features sensitive input from Hubert Laws. Another homage of sorts (I’m guessing) is the track ‘Memorex’ – homage to the old analogue tapes that many recording artists miss so much these days. The tune is reprised in bass-heavy style as the album closer.