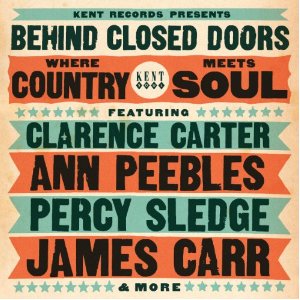 Kent Records have just released a pair of sizzling Southern soul compilations. Proper soul fans have always acknowledged the link between soul music and country and western, but if anyone doubts that thesis then the first of the new Kent collections will soon put them right. ‘Behind Closed Doors’, you see, is a wonderful 23 track assemblage of soul classics which were originally recorded by country artists. The set features some big soul names – amongst them SOLOMON BURKE, PERCY SLEDGE, ESTHER PHILLIPS, AL GREEN, JAMES CARR and CANDI STATON – as well as lesser known artists (like TONY BORDERS, THE LIMELITES and COOKIE JACKSON) but they all offer heart-rending renditions of one-time country hits. Amongst the highlights are ANN PEEBLES’ ‘Hangin’ On’, BETTYE SWAN’S ‘Don’t Touch Me’ and LITTLE MILTON’S ‘Behind Closed Doors’ which gives the album its title. The clever Kent compilers have also chosen some less obvious selections: so instead of offering us BROOK BENTON’S ‘Rainy Night In Georgia’ we get Mr B’s ‘She Even Woke Me Up To Say Goodbye’ and where you might have expected JOE SIMON’S version of ‘The Chokin’ Kind’ we get Z Z HILL’S take… and to keep the anoraks happy the sleeve notes tell you all you need to know about each song’s provenance.

Kent’s second Southern soul set is another dip into the archive of the Sounds Of Memphis label. Collectors will be delighted to have access to previously unreleased material from artists like DAN GREER, WILLIAM BOLLINGER, RUDOLPH TAYLOR and BARBARA AND THE BROWNS. There’s also material like GEORGE JACKSON’S ‘Things Are Getting Better’ which was licensed to Chess and with music from the 60s, 70s and 80s, there’s more than enough to satisfy all serious soul collectors and again the thorough sleeve notes (courtesy of DEAN RUDLAND) take you through everything. The collection’s appropriate title is ‘Lost Soul Gems’.