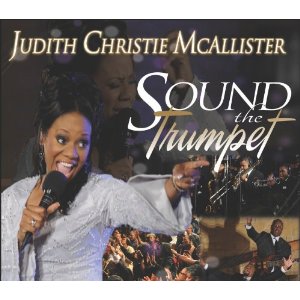 New Yorker, JUDITH CHRISTIE McALLISTER has been at the forefront of praise-based gospel music for almost 20 years and she’s just released her fourth solo album – ‘Sound The Trumpet’. Interestingly the long player was recorded three years ago – live at the Allen A. M. E. Church in New York City, but personal and professional problems have delayed its release till now.

The new album – released on the ever-dependent Shanachie label – is produced by MICHAEL BEREAL (of MARVIN SAPP fame) and the songs range from the rocky-edged ‘I Will Sing’ to the Caribbean-flavoured ‘Fire’ (both JUDITH’S parents hail from the islands). The big ballad is ‘Just Who You Are’ and the set features a number of guest vocalists including NANCY JACKSON JOHNSON and MICHAEL PUGH.