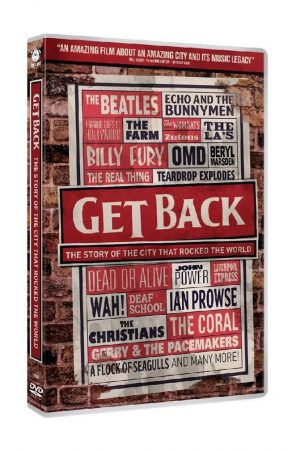 As usual the UK August Bank Holiday saw thousands of music fans converge on Liverpool for the annual International Beatle Festival. Many left clutching a brand new DVD that offers an in-depth look at Liverpool’s major role in the evolution of modern pop music.

However, this new film, ‘GET BACK’, is a little different to the usual histories of Liverpool music. You see ‘Get Back’ doesn’t just dwell on the magical days of the 60s. It also features the many Liverpool pre-Beatle hit makers (people like Lita Rosa, Michael Holiday and Billy Fury) and also devotes plenty of time to those who came after the Fabs…. bands like Deaf School, Echo and the Bunnymen, OMD, Frankie Goes to Hollywood, The Icicle Works, the Farm, the La’s, the Christians, the Wombats, the Zutons, the Coral. .. even Atomic Kitten!

Similarly the DVD doesn’t just dwell on the iconic music venues of the 60s (the Cavern, The Iron Door, and the Mardi Gras). It offers perspectives on later venues like Eric’s, the State and, of course, Cream, arguably one of the world’s biggest dance  music brands.

From the soul perspective, ‘Get Back’ offers plenty of interest. There’s interview footage with Joey Ankrah, member of 60s black harmony group, the Chants (pictured below). Sadly, despite some beautiful records, the Chants never made the big time (though members did morph into the Real Thing) but the band did have the honour of having the Beatles as their backing band on numerous occasions! Joey and others also talk about the influence of black music on 60s beat bands … remember the Beatles covered several Motown songs while Paul McCartney (who’s interviewed in the movie) always acknowledges his debt to Little Richard!

‘Get Back’ is a must for anyone who professes either an interest in music history and/or a love for a city that is without doubt (as the film amply proves) a world capital of music.