SOULSCAPE. . .RAIDERS OF THE LOST ARCHIVES 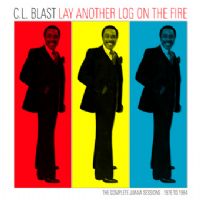 When it comes to bona fide, rare-as-hen’s-teeth antique soul – especially the gritty Southern variety – look no further than the current catalogue of the UK-based indie label, Soulscape. Set up by soul aficionado Garry J. Cape a couple of years ago as the successor to his well-regarded Grapevine imprint, Soulscape has found a niche as a company that specialises in exhuming the lost and forgotten recordings of soul music’s most obscure cult figures from the ’60s and ’70s. The label has several fine new releases just out on the shelves. Of interest to fans of blues-inflected soul is a compilation dedicated to the ’70s output of gutsy singer GEATER DAVIS, whose raspy voice sounds like an amalgam of James Carr and Bobby ‘Blue’ Bland. ‘I’ll Play The Blues For You: The Legendary House Of Orange Sessions’ features 16 tracks and includes his collectable LP, ‘Sweet Woman’s Love.’ Another fine collection devoted to an obscure Southern soul man is ‘Lay Another Log On The Fire,’ a sterling set from C.L. BLAST (aka Clarence ‘Junior’ Lewis). ‘The Complete Juana Sessions: 1976 to 1984’ focuses on Blast’s work with producer Frederick Knight.
A singer also revered by the soul cognoscenti is DORIS ALLEN, whose declamatory, gospel-reared voice shines brightly on an excellent 23-track set called ‘Shell Of A Woman: The legendary Playground Sessions’, which features some previously unissued sides from the 1980s as well as the singer’s brilliant late ’60s solo 45s (her popular duets with Big John Hamilton are also included).
Look out too for an exciting September Soulscape release that focuses on the highly coveted work of falsetto-voiced Southern soul singer SAM BAKER. ‘I Believe In You’ is a 22-track compendium spanning the years 1965-1969 and features all the sides Baker cut for John Richbourg’s legendary Nashville label, Soundstage 7. For more information go to www.garryjcape.com