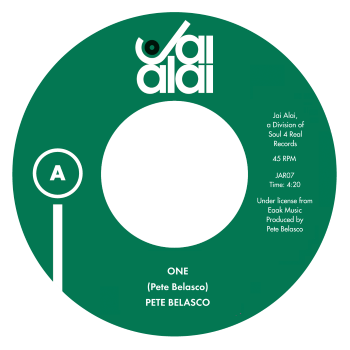 Boutique soul label SOUL 4 REAL has just announced two new releases on their JAI ALAI imprint which you may remember is dedicated to making available in vinyl, quality 21st century soul that is rare, collectable and previously unavailable on vinyl.

First up there’s a single from little known soul and jazz  man PETE BELASCO. What we do know is that Pete (a native New Yorker) was/is a multi- instrumentalist who was once signed to Verve Records. Prior to that he’d worked in various bands in and around Florida till a boating accident crushed his hands and he found it impossible to play his instruments. Pete then concentrated on vocals  and song writing, eventually coming to the attention of Verve who signed him up, releasing his debut album ‘Get It Together’ in 1997. It took a whole seven years  for a second album to appear – ‘Deeper’. That was followed by the Eaak label ‘Lights On’ album in 2012 and that LP is the source of the two songs that make up the new Jai Alai single – ‘One’ and ‘Sweeter’.

Both tunes sit neatly on the cusp of smooth jazz and sophisticated soul with Pete delivering in a captivating falsetto that shows the influences of Marvin Gaye and Curtis Mayfield . Both songs were self-penned  and co-produced with drummer Guy Eckstine. Though very 21st century they retain a 70’s Quiet Storm feel.

The second new Jai Alai comes from WILLIE WALKER & THE BUTANES and their sound couldn’t be more different to that of Pete Belasco. You see Willie and his band peddle good old, rough-hewn southern soul with an authentic blues undertow.

Memphis born but Minnesota-based, Walker sometimes appears as Wee Willie Walker and in the 60s he recorded for the legendary Goldwax label. His sides like ‘I Don’t Want To Take A Chance’, ‘There Goes My Used To Be’ and ‘I Ain’t Gonna Cheat On You’ are revered by soul collectors… and rightly so. More recently, Willie has collaborated with The Butanes. Together, they recorded three highly acclaimed modern soul/blues albums and toured the Netherlands, Switzerland and Japan. He also fronted his own R & B unit, Willie Walker and We “R” with whom he had a monthly residency at the Minnesota Music Café in St. Paul. Willie has also partnered up with Minnesota singer, songwriter, and author Paul Metsa. And despite his poor treatment at Goldwax, Willie is proud of his association with the iconic label and in 2018 alongside Percy Wiggins, he performed a Goldwax tribute at the Porretta Soul Festival.

The two Jai Alai tracks comes from Willie’s time with the Butanes. They are a gritty, brassy, soulful ‘I Feel It’ and a more bluesy ‘Cry, Cry Cry’(not the Bopbby Bland song, by the way). Both show that despite his lack of major success and general acclaim, Willie was a real contender – right up there with people like Syl Johnson, James Carr, Tyrone Davis, L.V. Johnson and the aforementioned  Percy Wiggins. Sadly, we use the past tense as Willie died peacefully in his sleep in November 2019.

Learn more about Willie’s last album here – https://www.soulandjazzandfunk.com/news/willie-walker-after-a-while/ and in the meantime enjoy some of his legacy thanks to Jai Alai/Soul 4 Real.