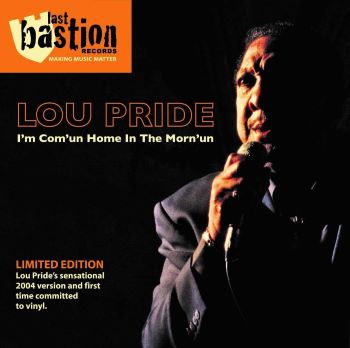 Newest boutique soul reissue label is LAST BASTION. The indie label is the brainchild of soul collector  Andy Bellwood and his operation is based in the wilds of North Yorkshire’s National Park. He tells us the office is a converted donkey stable! The label’s  name, by the way, is a reference to a music venue popular back in the day – Andy, his wife, Densie and Dizzy Holmes of Detour Records are revisiting it via the name!

Last Bastion hits the ground running with a “new” version of LOU PRIDE’S Northern favourite ‘I’m Com’un Home In The Morn’un’. You’ll remember the original came out in 1970 on Suemi Records and quickly became a scene favourite. Originals we’ve learned now fetch something like £7,000. Fast forward to 2004 and it seems Mr. Pride and his band re-recorded it for Severn Records and it’s that version that is the first Last Bastion release. The full length recording’s on the 7” B side while a more DJ friendly edit sits on the A side. The original was always quirky and the Severn Recoding retains the quirkiness while, naturally, Lou’s voice is older and world weary; no bad thing for a soul record!

Pride’s 2004 ‘I’m Com’un Home In The Morn’un’ on Last Bastion will be followed by releases on Steve Marriott and Con Funk Shun/Jay Cee. Last Bastion tell us that each release will be strictly limited to 300 copies – no repress!

The label plans to release three to four 45s per year. Each will come with an informative  picture sleeve. Criteria for release will be to issue previously unreleased material on 45 with the emphasis on “soulful” music as opposed to “soul”. So, expect diversity and eclecticism across those “soulful” genres making the Last Bastion Record label unique in its identity.  Find out more @ http://shop.detourrecords.co.uk/epages/es785745.sf/?ObjectPath=/Shops/es785745/Products/LOUIMC-45