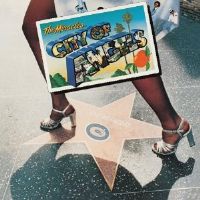 Universal Music Catalogue has just released a strong trio of soul reissues. First up – and first time ever on CD – is the MIRACLES’ 1975 album ‘City Of Angels’. The LP, of course, featured BILLY GRIFFIN as lead vocalist and was one of the first concept albums, telling the tale of two people searching for love and fame in Hollywood. ‘Love Machine’ was the album’s big single, though ‘Overture’ and ‘Nightlife’ garnered massive club acclaim. The reissue comes with an authoritative essay from DAVID NATHAN and an instrumental version of ‘Love Machine’ is included as a bonus. Two bonus instrumentals too on the reissue of BARRY WHITE’S first proper solo set – ‘I’ve Got so Much To Give’. Originally released in 1973, this was the album that started it all for the Walrus Of Love and it’s been out of print for a long, long time. The third big Universal reissue is a collection of live tracks from KOOL AND THE GANG, out under the title ‘At The BBC’. The 13 tracker includes all the band’s top tunes including ‘Hollywood Swinging’, ‘Ladies Night’ and ‘Joanna’.