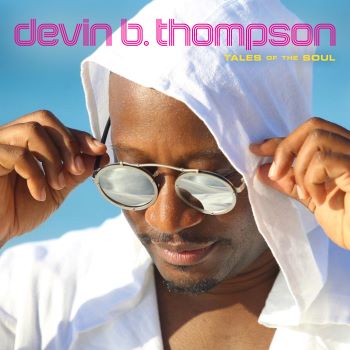 Though he’s a new name to me, I’ve a feeling that Chicago soul man DEVIN B THOMPSON is set for mighty big things!  Typical journalistic hyperbole? Well no; you see that judgement is evidence based. Devin’s upcoming debut album ‘Tales Of The Soul’ is brimming with quality soul that is both contemporary and rooted in soul’s golden age. The voice is a classic soul voice – gritty, emotive and convincing while the delivery and production also take their cues from the past. Like most of soul’s classic albums, ‘Tales Of The Soul’ was recorded in one studio with one production team (David Earl and Kevin Anker) and with the one tight team of studio players.

First, though, a little background. Thompson hails from the small town of Joliet, just outside Chicago. He started singing in church but switched to trumpet in his teens and was soon playing live is his elder brother’s band where he was eventually coaxed to the mic as vocalist. Devin tells us that amongst his influences were Marvin Gaye, Sam Cooke, Donny Hathaway, Prince and, above all, an obscure soul man Willie Newsome. Newsome will be known to the Northern soul crowd. His ‘We’re On Our Way’ was a big Northern tune. (He also recorded under other names like Willie Parker) but more importantly he was a friend of Devin’s father and the young singer was soon working with Willie in a band, the Georgia Francis Orchestra.

Newsome, it seems, then secured a record deal with Chicago’s Severn Records. He began working on an album with, naturally, young Devin in tow but sadly Willie was diagnosed with cancer and died in September 2019. With everything in place to make an album Thompson stepped up to the plate and the result is the wonderful 11 tracker that is ‘Tales of The Soul’.

To illustrate where the LP’s coming from and to give you just a flavour of the sound we need to do no more than point you to the album’s three opening tracks – covers of Bobby Bland’s ‘Love To See You Smile’, Little Milton’s ‘I’m Gonna Cry A River’ and Joe Simon’s ‘Something You Can Do Today’. That trio is treated with respect, but each cut is given a modern but never gimmicky twist. They open the album in delightful, old school fashion and the good news is that the remaining 8 tracks (all Thompson originals) are cut from the same soulful cloth. ‘Deeper’ and ‘Can’t Get Over You’ are amongst the best new soul tracks I’ve heard so far this year but, in all honesty, there are no duds or filler here. Thompson clearly relished the opportunity to craft this modern, pastiche-free paean to classic soul and his producers and band are all on the same wavelength.

Look, in short, ‘Tales From The Soul’ is a wonderful collection and little wonder it’s already winning plenty of exposure and praise from top Stateside soul tastemakers. If you can wait, it’s released on October 30th on Severn Records.