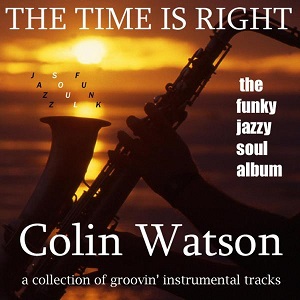 It’s always been one of soul’s best tunes, but now Young-Holt’s evergreen ‘Soulful Strut’ has been given a wonderful contemporary makeover from UK musician COLIN WATSON.

Colin’s musical odyssey began when he was the drummer in a covers band playing the clubs of his native Middlesbrough in the 70s. He then taught himself keyboards and guitar and hasn’t looked back – working on library music, TV programmes and ads. (Amongst other shows Colin’s music has graced Rick Stein’s cookery series.)

Last year Colin released his first solo album – ‘The Time Is Right’ (the title’s self-explanatory). It was a collection of mainly self-penned instrumentals and to help him deliver he enlisted Derek Nash, the sax man in the Jools Holland band. The album picked up favourable reviews and some of the music was featured on a number of jazz and soul stations. In particular, Colin’s version of ‘Soulful Strut’ – which features some catchy vibes and a beguiling flute – proved so popular that the tune’s just been released as a single…. you can catch it on all the usual internet platforms.