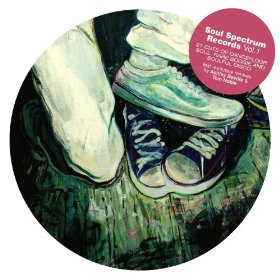 For a few years now JAZZMAN RECORDS have been flying the flag for vintage, collectable jazz, soul and funk. They also have a subsidiary dedicated specifically to good old soul music. SOUL SPECTRUM is that label’s name and the imprint has just launched its first long player – a great 21 track compilation imaginatively titled ‘SOUL SPECTRUM RECORDS VOLUME 1’.

The set’s been curated by DJ EUAN FRYER, who, we’re told, has been working on the project for four years! What he’s come up with is an eclectic set of obscure dance floor soul, rare boogie and soulful disco and to top it all a couple of the cuts have been given 21st. century tweaks by ASHLEY BEEDLE and TOM NOBLE. NOBLE has set his mixer to work on the discofied ‘You’re The Best’ from LaROM BAKER (a busy little blighter of a tune) while Mr BEEDLE has reconstituted PHILIP WRIGHT’S ‘Keep Her Happy’ – a bright, soul-laden foot tapper.

Elsewhere there are tunes from BARBARA LYNN (‘Mellow Feeling’), WILLIE WRIGHT (a version of ‘Right On For The Darkness’) and LITTLE BEAVER (‘Listen To My Heartbeat’). ‘Give Me One More Chance’ from TARGET is another of the set’s outstanding cuts – a big slab of Philly style harmony soul. The notes suggest though that the album’s biggest coup is ‘All My Life’ from FLUORESCENT SMOGG – a tune which, it seems, is changing hands for more than $8,000 on 45! Yes… it’s a good tune but make up your own mind if its $8,000 worth of “good tune”.

The music comes as a 21 track CD and as a double vinyl pressing which comes with a 7″ repress of that FLUORESCENT SMOGG tune. My only complaint is that the notes don’t really tell us anything about the provenance of the music… but I guess the denizens of dance aren’t that bothered about such matters.