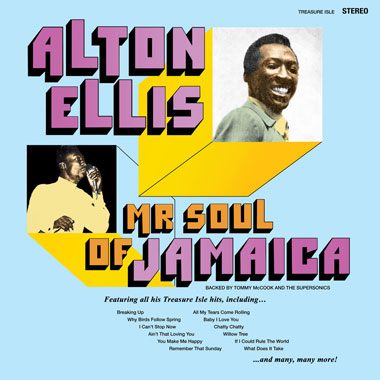 A goodly number of soul folk are partial to a little ska and reggae… so they need to know that Universal have just released a lovely little 2CD, 40 track collection on Jamaican super star, ALTON ELLIS. ELLIS – who’s often referred to as the father of Lover’s Rock –began his career in the late 50s and he was heavily influenced by American artists like Fats Domino, Billy Stewart and The Impressions.

He worked chiefly for DUKE REID’S famous Treasure Isle label and his ‘Mr Soul Of Jamaica’ LP became one of reggae’s bestselling albums of all time. It was released in the UK with the title ‘Alton Ellis’ Greatest Hits’ and, surprisingly, despite its status, it’s never been reissued on CD till now.

This new version contains the album’s original 12 tracks along with the rest of ALTON’S Treasure Isle output. Enjoy all his hits and quirky versions of soul standards like ‘You Made Me So Very Happy’, ‘La La Means I Love You’ and ‘Duke Of Earl’.