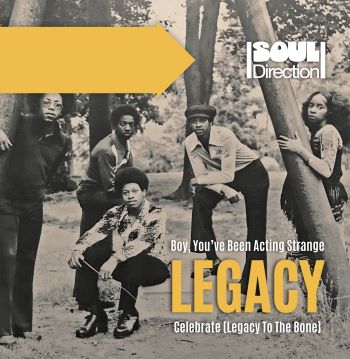 The latest 7” single from SOUL DIRECTION RECORDS features two sides from a somewhat obscure Detroit band called LEGACY. Soul anoraks, however, will know a little about some of the band members.

The group was put together by Eddie Watkins Jr. Eddie was something of a child prodigy, learning piano at an early age before becoming a locally known bass player. That local notoriety brought him to the attention of Motown’s Norman Whitfield who had Eddie play bass on the Temptations’’ ‘Masterpiece’ LP.

Legacy recorded some sides for Don Davis by which time Ms Baker was long gone, replaced as lead singer by Brenda Joyce Evans – sometime singer with the Undisputed Truth (that Whitfield connection again!). Brenda (who was by now married to Eddie)  fronted the songs on the Davis-produced single on Tortoise International Records. (‘I Must Confess’/’Believe In Yourself’)

Enter  the Soul Direction sleuths who discovered a couple more Legacy songs amongst the tape boxes that contained the  Tortoise single and after agreeing a licence with Eddie Watkins, those songs make up the imminent  Soul Direction 7”.

The A side is ‘Boy You’ve Been Acting Strange’ – a busy, bustling little dancer with more than a hint of Philly (think Blue Magic) about it. The B side ‘Celebrate (Legacy to the Bone)’ is a different kettle of fish – a tough and rough funky workout with some heavy bass lines and a rocky guitar solo. Both songs were written by Eddie Watkins.