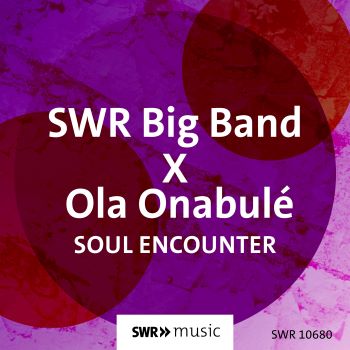 British/Nigerian singer/songwriter OLA ONABULE has been making music professionally for over two decades. He’s performed at prestigious soul and jazz festivals worldwide, has filled theatres and clubs, entertained at numerous high profile private events (including the Beckhams wedding!) and has recorded prolifically. Proper soul fans all know and love his classic tune, ‘Soul Town’ while his  long players – ‘It’s The Peace That Deafens’. ‘Pointless’ and  ‘Seven Shades Darker’ garnered plenty of critical acclaim and soul chart success. Our man’s never out of work and for some little time now he’s been working with big bands in continental Europe and, again, winning rave reviews for his performances. So, it was logical for Mr O to get into the studio with a big band and cut an album – and that’s exactly what he’s done with ‘Soul Encounter’.

The “encounter” is between Ola and the musicians of the SWR BIG BAND (based in Stuttgart) and between them they swing and swagger through 9 songs from Ola’s extensive back catalogue – with the undoubted highlight being the aforementioned ‘Soul Town’. This “new”, big band styled ‘Soul Town’ was released as a single a week or two back and was critically acclaimed. The song’s message still resonates and the new production offered new perspectives to the familiar. Jo Barnikel’s piano parts on the track were/are quite beautiful enhancing Ola’s always majestic vocals.

The LP’s opening track, the jazzy ‘Easy Prey’ is another immediate grabber while the familiar ‘Swinging Wide’ and ‘Be A Man’ take on fresh colours. The album’s second real highlight however is a tremendous version of Michael McDonald’s ‘The Meaning Of Love’. McDonald is rightly revered but here Ola shows he can match him soulful note for soulful note – a tremendous track with a beautiful sax solo from Matthias Erlewein.