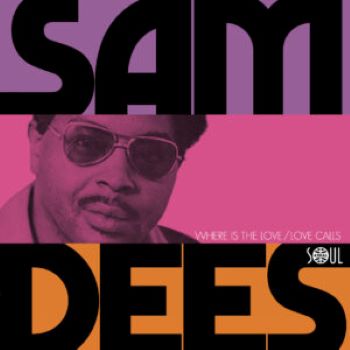 Dear Sam Dees is the soul man’s soul man. Almost unknown in the mainstream but revered by connoisseurs who relish each and every one of his releases but, sadly, those releases are relatively few and far between mainly because Dees saw/sees himself chiefly as a songwriter rather than an artist and it’s two of his song writing demos that make up the two sides of this first new Soul4Real 7”.

The A side is a sweet and lovely, ‘Love Calls’ whick anoraks will recognize from the Tavares’ version which was actually named ‘My Love Calls’ when it appeared on their 1979 ’Madam Butterfly’ album. The Dees’ original demo is a tad less harmonic but no less emotional but if you know Dees you’d know that. The  B side is a melodic ‘Where Is The Love’ – a delicious soulful meander that, oddly, was never taken up by anyone when Sam was circulating the demo. It is a classic Sam Dees song and though, like ‘Love Calls’, it is  a demo, that description doesn’t do it justice. They’re both finished entities and first time on vinyl for both. Lovely.

The Jimmy Lewis release pairs ‘I Can’t Leave You Alone’ with ‘Don’t Sit Around’. Both tunes date from the mid 70s and both have a distinctly southern/bluesy flavour betraying Jimmy’s roots (though both tracks were actually recorded in LA!). Once again anoraks will know that both these Lewis songs were included on Ace/Kent Hotlanta label retrospectives but we believe that this is the first time for the songs to be featured on 7”. You probably don’t need me to remind you that both these discs are bound to sell out quickly; so, you can learn more @ https://www.soul4real.es/soul-4-real-records/