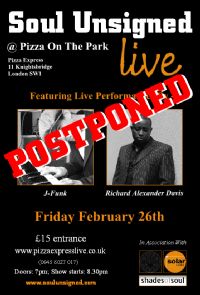 For circumstances beyond everybody’s control, Soul Unsigned’s live soul spectacular at London’s Piazza On The Park on Friday 26th February has been postponed. The evening which was to showcase J FUNK and RICHARD ALEXANDER DAVIS will be rescheduled later in the year. However, one party that WILL happen is the launch show for the label’s new Jump Start compilation. That happens on Sunday February 21st at London’s ‘The Surgery’ @ East Village, EC2. Album complier GINGER TONY will be on hand along with stalwarts BOB JONES and MARK WEBSTER. It runs from 14.00 though to 23.00 and entry is free. There are full details on www.soulunsigned.com