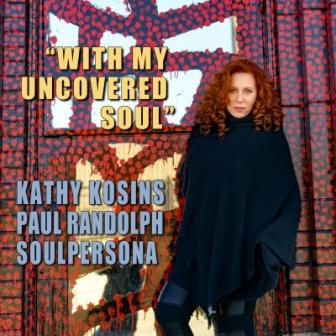 Since the summer we’ve heard quite a bit about Detroit jazz and soul singer KATHY KOSINS. She broke through with the single, ‘Could You Be Me’ which featured Paul Randolph and its wonderful Opolopo mix it won a place on Gilles Petersen’s ‘Brownwood Bubblers’ compilation.

We were told that the parent album was due in September. To be called ‘Uncovered Soul’ – named for the track of that name – the set’s now been put back to February. And, here’s the thing, that particular song  has been renamed … now it’s ‘With My Uncovered Soul’. The album, though, remains ‘Uncovered Soul’.

It seems that perfectionist Kathy re-vocaled the song and had it remixed by Soulpersonna. She says: “Soulpersona and Paul Randolph created a new soul arrangement of my song ‘Uncovered Soul’ and they gave it a new name! They recorded a Phat Detroit bottom of bass and drums, a great set of guitar parts, wonderful keyboard tracks and percussion in a tight groove. They played it for me . They were making a record of it . I said NO I have to sing it. I literally auditioned to sing my own song. They hired me!”