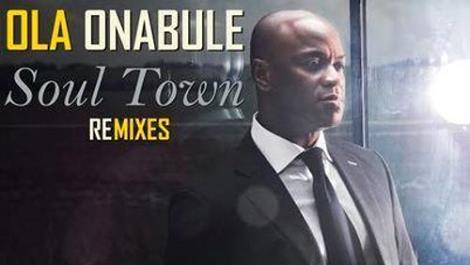 All proper soul fans know that a great song will never go away. Great tunes live forever and one such anthem is ‘Soul Town’ from one of Brit soul’s finest, OLA ONABULE. The song first surfaced in 2005 on the man’s fifth long-player and has since become a soul radio staple, a favourite with the soul cognoscenti and a mainstay of Ola’s live stage shows.

This year the song has already enjoyed a huge renaissance courtesy of DSG Music and a cool Philly style remix from Nigel Lowis. Well, if you want more, ‘Soul Town’ is soon to become available in two new, vital mixes.

First up us is a soul-laced CW Mix. Tweaking the controls here is the ever-dependable Colin Watson. A respected jazz drummer in his own right and known for his great mixes on Neo and Soulutions, here Colin re-imagines ‘Soul Town’ as a sophisticated slice of modern soul… sure to be one of 2015’s true anthems.

The second new ‘Soul Town’ mix comes via Mike Maurro who takes the tune into Soulful House territory; be clear though, the emphasis is on the “Soulful” . The beats are a tad faster (naturally) and for variety there’s a tremolo on some of the vocals. Add some jazzy piano and swirling Philly style strings and you know you have a winner on your hands!

All the remixes will be officially available from April 13th via DSG Music. In the meantime Ola is putting the finishing touches to his 8th album ‘It’s The Peace That Deafens’ … one of the year’s most eagerly awaited long players.