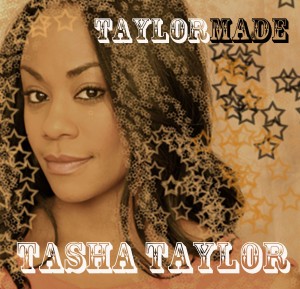 TASHA TAYLOR is the daughter of soul legend JOHNNIE TAYLOR and she’s about to launch her debut musical project ‘Taylor Made’. On it you’ll hear the lady’s unique take on soul music – an amalgam of diverse influences like ARETHA, ETTA JAMES, BB KING, NATALIE COLE, LAURYN HILL and , of course, her father.

TASHA grew up in Texas before moving to Boston to study theatre at that city’s university. That training has led to parts in ‘House’ and ‘Ugly Betty’ as well as in indie films. She tours with JIM BELUSHI and DAN ACKROYD in their official BLUES BROTHERS tours and she’s about to feature in a stage musical about RAY CHARLES. In ‘Unchain My Heart’ she’ll play the part of MARGIE HENDRIX.

Earlier this year TASHA hooked up with producers STUART BENJAMIN, ROB ARBITTER and GARY ADANTE and headed for the recording studio to cut a soul album in loving memory of her dad, who passed away in 2000.The result -‘TAYLOR MADE’ – is a 16 track set, written, produced, arranged and performed by TASHA. Recoded in Los Angeles, the album features live instrumentation and a full horn section – the aim being to re-capture the spirit of authentic soul. The set’s big cover is a throwback to her father’s first million-selling hit on Stax, ‘Who’s Making Love’, while the first single is a solid slab of old school soul, ‘Queen’.

Clearly JOHNNIE would be proud of ‘Daddy’s Girl’…. full review of the album and interview with TASHA here at SJF very soon.