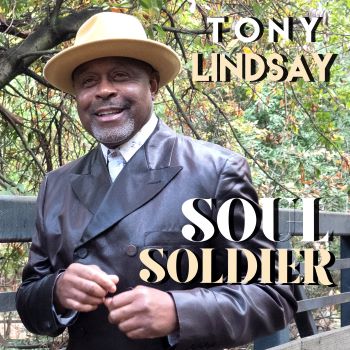 Though he’s not quite a household name, soul connoisseurs will know all about TONY LINDSAY. Though from Kingston, New York, Tony’s career really started when he moved west in 1980. In San Francisco he formed his first band Spangalang, then went on to work with The Soul Soldiers, Black Magic, and the Ray Charles Project. Then  he was spotted by Carlos Santana who brought Tony into his band. With Santana, Tony featured on seven albums, won 11 Grammys and toured the world. So, yes, maybe not a household name – but quite an achiever and that’s before we go on  to talk about his song writing skills. Tony’s penned songs for people like Whispers, Tevin Campbell and Howard Hewett. He also sings sessions  and then there’s his burgeoning solo career.

If you’ve not tuned in yet to the talents of Mr L, now’s the time to do so as he’s just released his fourth solo album – ‘Soul Soldier’, named (maybe) for that earlier band of his?

The album is a concise 11 tracker – brevity is often a real virtue… no filler, no skits or annoying interludes – just decent soul from start to finish. Fans of Tony will be familiar with some of the music. The LP includes his three previous single s- ‘Life Partner’, Fixed’ and ‘All Is One’. That last one is a throwback to our man’s Sanatana days and it opens the album in fine fashion – salsa anybody? ‘I Believe In You’ is another decent dancer – a funky steppers sort of thing but the real highlights are the slinky ballads like ‘I Adore You’, ‘Maybe Someday’ (sweet acoustic guitar here) and the very contemporary ‘Text You’. The album’s title track, by the way, is a very pleasing old school groove with (surprise, surprise) a military, march feel.

This album doesn’t come with big fanfares and blaring publicity. It doesn’t need those gimmicks – it’s a proper contemporary soul album. Sadly, collections like this often fall under the radar – don’t let it drop off yours. It’s a consummate collection – no frills, just decent soul delivered by a true, experienced pro! Out now!