SOUL REISSUES ON THEIR WAY FROM UNIVERSAL 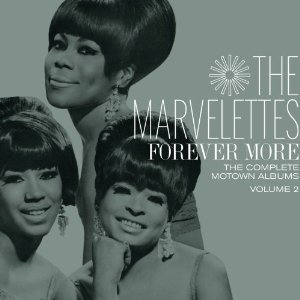 Universal’s UMC imprint is set to release three significant reissue packages in the UK in the next few weeks. Top of the list is a 4-CD MARVELETTES’ retrospective, ‘The Complete Motown Albums Vol. 2,’ which is packed with 108 songs and chronicles the period 1967-1970. As well as containing four complete late-’60s albums from the girls the set’s fourth disc is titled ‘Lost & Found’ and is devoted to gems from the Motown vaults (there are 24 in all).

Also originally on Motown was the eponymous 1976 album by DIANA ROSS, which featured ‘The Theme From Mahogany’ and the disco classic, the much-sampled ‘Love Hangover.’ It’s now been expanded to a 2-CD set comprising 24 bonus tracks (18 of which are previously unheard). They range from alternate mixes to rare outtakes – including the ultra-rare promo 45, ‘Coming Home’ – and an audio interview with Ms. Ross.

One of BARRY WHITE’S best ever LPs, ‘Let The Music Play,’ will soon be back in circulation again. The six-track album originally came out on 20th Century in 1975 and includes the hit title song and ‘You See The Trouble With Me.’ Among the five bonus tracks are contemporary mixes of the title song by John Morales and Funkstar.

Look out for reviews of these titles soon at SJF.