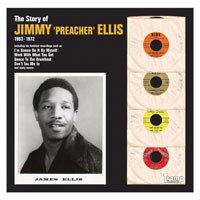 Germany’s Tramp Records start 2013 with a 17 track retrospective on Arkansas soul and blues man, JIMMY “PREACHER” ELLIS. You won’t be surprised to learn that JIMMY began his musical career in church – singing with his brother in the store front Gospel church in the rural backwater of Foreman, Arkansas. In 1950 the family moved to Seattle and the young singer joined the choir of the Mount Baker Baptist Church. He eventually joined local gospel quartet, THE TRAVELLING FOUR but in 1955 he was drafted into the army.

After his discharge he returned to Seattle and took up the guitar and with ex members of THE TRAVELLING FOUR he formed a doo-wop group, THE CENTURIES. Then, in 1964, he took a leap of faith and went solo – heading for Los Angeles to look for a deal.

In LA he hooked up with FERDINAND ‘FATS’ WASHINGTON –a songwriter and, more importantly, a record label owner. ELLIS cut several singles for the entrepreneur’s Movin’ and Ride labels before pacting with MEL ALEXANDER who ran the Kris and Space imprints. Big success eluded ELLIS but his down home funky delivery –a very rough-hewn cross between Bobby Bland and Arlester Christian – has won him the affections of serious soul and blues collectors.

Till now his recordings have been hard to find, but the Bavarian soul detectives at Tramp have managed to gather together 17 of his best for their ‘The Story Of Jimmy Preacher Ellis’. Highlights abound… but listen to a sparse quirky version of ‘Since I Fell For You’, an almost unrecognizable cover of Brook Benton’s ‘Kiddio’, and the nearly-smooth ‘Baby I Love You’. Listen in anywhere though and you’ll find the real deal and be left in no doubt as to why ELLIS was dubbed “THE PREACHER”. The set comes complete with a 12 page booklet which will tell you everything you ever wanted to know about this long neglected soulster. Find out more @ www.tramprecords.com