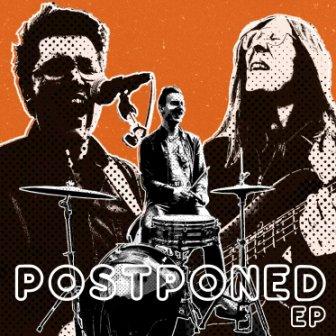 POSTPONED are a Swedish soul band made up of Otto Nilsson (guitar, vocals), Albin Östlund (bass), Sebastian Ferger (drums) and Mattias Sämberg (keys). Spokesperson Otto tells us the band’s name comes from the fact they fail to do anything on time; they’re always putting things off! Despite that they have managed to record a four track eponymous EP that’s just been released. (Oddly, the EP cover shows just three band members!)

Otto tells us that the band’s music is influenced by Motown and you can hear that on the EP’s highlight – a fast, beaty ‘Useless’ that sort of gets itself right into Northern soul territory. Elsewhere, ‘DTYB’ has a country soul flavour, ‘Something’ is a dramatic, building ballad while the choppy ‘Like I Belong’ is more pop than true soul.

The Gothenburg-based band say: “This EP has been made possible by unhealthy amounts of optimism, tolerant neighbours and wonderful friends! We are so happy and proud that it’s now available to listen to!” Find out why they’re so happy by investigating @ www.facebook.com/postponedmusic