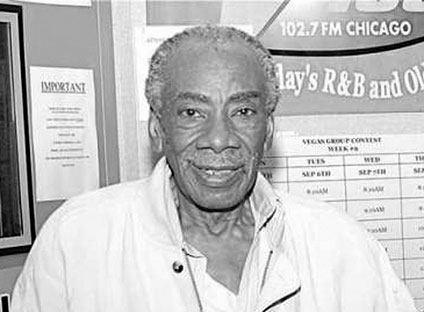 The last few weeks have seen the deaths of three soul stalwarts who, though never major players, have each contributed something to the development of soul music.

Born in Chicago in 1940, CLINTON GHENT (pictured above) died on July 7th. He’d been suffering with emphysema and chronic obstructive pulmonary disease and was aged 78. Mr Ghent will be remembered as a choreographer and host of the iconic Soul Train TV show. He was a close friend of the show’s founder, Don Cornelius and he was co-host between 1970 and 1979. As a choreographer he worked with the Jackson 5 in their early days and also the Emotions, the Whispers and the Chi-Lites. After his show-biz career ended , he worked for the US postal service.

Philadelphia’s CLARENCE SCOTT (pictured) died back n May. Known as “Scotty” he was a member of doo-wop group the Royal Serenaders. He then went on to work with the Castelles (for whom he also played guitar). He also featured on the Drifters’ version of ‘White Christmas’ and he sang with the Clovers on their ‘Love Potion No 9’.

New Orleans’ R&B singer JOE VALENTINE (pictured) died on 13th July in Austin, Texas. He was a prolific songwriter, producer, promoter, club owner and artist in his own right. In a lengthy career he worked with people like James Brown, Joe Tex, and Jackie Wilson as a keyboard player and fronted his own band, Joe Valentine and the Imperials.