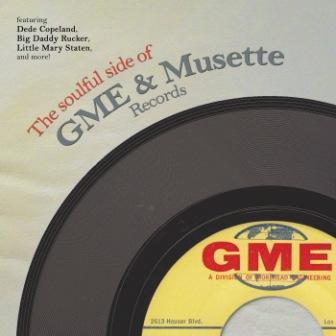 Soul collectors know that in the genre’s golden era there were thousands of tiny, independent soul labels. None were tinier of or more independent than San Diego’s MUSETTE RECORDS. Research reveals little about Musette simply because the owners were oddly secretive and, even more oddly, not that interested in music!

You see the tiny California label was set up in 1965 by a group of Afro-American doctors as an elaborate tax dodge… a business against which they could claim tax relief! Musette was in business between 1965 and 1968 and issued less than 20 singles. There was no airplay, no distribution agreement and consequently no sales!

Most famous name to record for Musette was Lani Groves who, sleeve note anoraks will tell you, was a member of Stevie’s Wonderlove in the 70s. Her father was Ervin Groves who also recorded for the label… as Ernie Groves and as Ervin Rucker and Big Daddy Rucker. Ernie/Ervin also set up a Musette offshoot, GME Records, but like the parent company it enjoyed no success!

However, as you might guess, Musette/GME Records have now become collectable and to meet the demand Germany’s TRAMP RECORDS has just issued a 15 track compilation, ‘THE SOULFUL SIDE OF GME AND MUSETTE RECORDS’ which offers a selection of both label’s output.

Musically, the soundscape is rough and ready and channels what were the then current popular soul sounds. Tracks that offer plenty of interest include ‘The Price I Had To Pay’ from Dede Copleand that has the flavour of Bobby Bland and Little Mary Staten’s ‘Helpless Girl’ that nicks the intro of Barbara Mason’s ‘Yes I’m Ready’ before morphing into a Southern soul sizzler. Blues fans will love Big Daddy Rucker’s ‘Christmas In The Ghetto’ but most soul collectors will find plenty to enjoy.