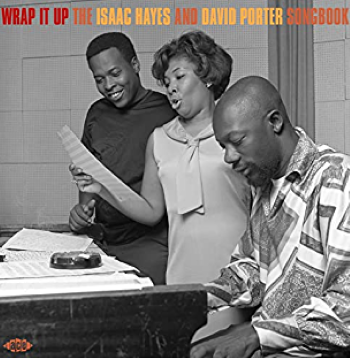 ISAAC HAYES and DAVID PORTER are the latest writers to enjoy a compilation  tribute to their work from Ace Records… and soul  fans might say about time!

The pair, of course, are always linked to Stax and in classic soul’s golden age, it appeared that their music was everywhere. Interestingly, though, it seems that Ike and David only wrote just over 50 songs together . However, here’s a case of quality over quantity and the album, ‘WRAP IT UP THE ISAAC HAYES AND DAVID PORTER SONGBOOK’  offers 24 of the duo’s very best songs.

At Stax, Hayes and Porter’s main outlet was the “dynamic duo”, Sam and Dave. Between 1965 and 1969 Moore and Prater scored 12 consecutive hits with Hayes/Porter songs, but this being a “various artists” compilation, only one is included her – but it’s most apt… 1967’s ‘Soul Man’. We don’t really need to say much more save that it’s estimated that there have been over 80 covers of the song. But you know what they say about “the original”!

Other featured Sam and Dave songs featured here in “other versions” include ‘Hold On I’m Comin’ from the Righteous Brothers, ‘Wrap It Up’ from Archie Bell and the Drells and  ‘When Something is Wrong With My Baby’ from Otis Redding and Carla Thomas. Fairly obvious choices from the compliers but where this collections scores is in the selection of artists who aren’t quite so obvious. So Sam and Dave’s ‘You Don’t Know Like I Know’ is here rendered by the UK’s Keith Powell and Billie Davis; ‘You Got Me Hummin’’ is in a version by the Hassles (an early Billy Joel band!); ‘I Thank You’ comes via ZZ Top; ‘I Take What I Want’ is in the Bishops 1978 version; and ‘May I Baby’ is presented here in a Peter Frampton 1979 cover. All respectful and intriguing.

Other featured artists include the Soul Children, Mable John, Johnnie Taylor, Homer Banks, the Emotions, Charlie Rich and dear Aretha. More left field is a version of ‘B-A-B-Y’ from Rachel Sweet adding to the variety and interest.

WRAP IT UP THE ISAAC HAYES AND DAVID PORTER SONGBOOK’ out  now via ACE RECORDS.