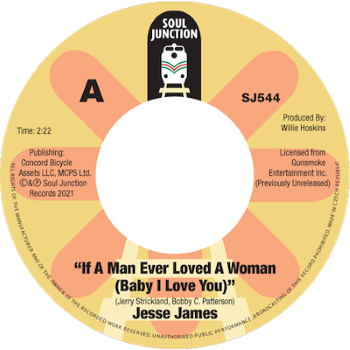 The latest release from the ever-reliable SOUL JUNCTION RECORDS comes from ever-reliable indie soul man JESSE JAMES. Soul Junction have a long relationship with the Arkansas singer. I think it goes back some ten years when SJ released Jesse’s  sedate stepper, ‘I Gave You Love With An A Plus’. Then there was the Soul Junction album ‘Let Me Show You’.

Last 7” offering from the label on Jesse was  ‘(The Girl In) Clinton Park’. That was a previously unreleased  cut from 1971 and was lapped up by proper soul collectors and the new Soul Junction/Jesse James single comes from the same 1971 Searra Sound Studio sessions. The A side offers a bright, breezy, optimistic ‘If A Man Ever Loved A Woman (Baby I Love You)’. Like ‘Clinton Park’ this has lain in the vaults for 50 years… but it sounds incredibly fresh and vital!

The song was originally recorded by Texan soul man Bobby Patterson in 1970 and a year later producer Willie Hoskins had Jesse record it in a more up-tempo fashion for Zay Records. For reasons never explained it was never released but now you can enjoy all its soul magic and optimism via Soul Junction.

The B side of the release features another 70s song that was never issued at the time. It’s ‘I Don’t Want A Divided Love’ which Soul Junction put out on that aforementioned JJ album, ‘Let Me Show You’. The label people tell us that they had many requests to issue the tube on a 45 and here they oblige . It’s a soul gem, just like that A side, ‘If A Man Ever Loved A Woman (Baby I Love You)’. Find out more @  www.souljunctionrecords.co.uk