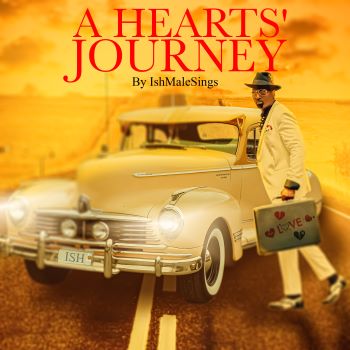 A coterie of heavyweight soul tastemakers are currently enthusing about a new album called ‘A Heart’s Journey’ from a new (ish) singer, ISHMALESINGS. The album is just out and even a cursory listen reveals that those tastemakers know what they’re talking about! This year we’ve seen the release of some wonderful soul long players and now this ‘Heart’s Journey can be added to the A list of 2022!

First a little info. IshMaleSings (that’s how he spells it!) is the musical alter ego of Sammie Lee Muhammad (pictured right) who hails from Shreveport, Louisiana but now he works out of Dallas. He’s been around for some years – he works a lot in the bars and clubs of Vegas – and he’s yet to break though. ‘A Heart’s Journey’ might well be the one to open the floodgates!

The album track that first won all the attention is ‘Gimme Sum R&B’ – a sweet, nostalgia-laden tune that oozes a proper soulful quality and despite the adjective “modern”, the modern soul crowd are suckers for nostalgia. They loved it and ‘Gimme Sum R&B’ climbed the official soul chart. It really works – a lovely tune by anybody’s standards.

Further investigation revealed plenty more gems on the 13 tracker – most notably the Marvin Gaye flavoured ‘What Can We Do’. This one, like ‘Gimme Sum R&B’, is another future soul classic. Tight beats, a lovely sax solo, a layered vocal sound that echoes Gaye in his pomp and a message in the music. The track has everything – even a rap from H2O-Flow (more of that later!)

Elsewhere, ’Excuse Me’ opens the album in fine style, ‘If You Want Somebody’ sounds like another Gaye tribute with a contemporary twist, while the ballads ‘All Of Me’ and ‘I Want You’ are as good as anything the lauded John Legnd currently puts out!

IshMaleSings’ PR people resort to the old cliché “all killers, no fillers” to describe this album – and you know, they’re right! We can now add IshMaleSings’ ‘A Heart’s Journey’ to 2022’s growing list of top class soul albums.

Now back to ‘What Can We Do’ and that rap. We know sections of the soul crowd are anti-rap, so to please those people IshMaleSings has commissioned an edit that leaves out the rap (even though it’s totally organic and non-offensive!)  and a four letter word. I guess this makes the tune more radio friendly. So, there you go! However, the no-rap edit is not commercially available. You can access it via Mark Turner’s excellent Soul Stutter web site…. Find out more @ https://soulstrutter.blogspot.com/2022/09/ishmalesings-2022-what-can-we-do.html But why not go mad and give the original mix a try…. It won’t harm you… honest!