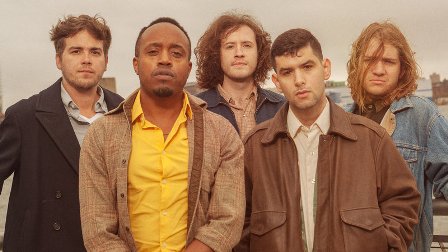 DURAND JONES and the INDICATIONS are one of US soul’s best kept secrets. The five piece formed in 2012 when, as students at Indiana University in Bloomington, they discovered a mutual love for vintage, classic soul music. Their 2016 self-titled debut album impressed many with its raw take on the genre – channelling the great sounds of people likes Otis Redding, Sam and Dave and Eddie Floyd. Described as “old school soul with a new school honesty”, the LP brought the Indications gig after gig – almost all sell out affairs.

The band are now all set to release a new album – ‘American Love Call’ which they describe as “more Gamble and Huff than Sam and Dave”. To help promote the set the boys are about to embark on a mini European tour which kicks off at London’s Rough Trade tomorrow (January 18). Then it’s off to Nottingham (Rough Trade again) on Saturday January 19, Bristol’s Rough Trade on Sunday January 20th, then back to London’s Dingwalls on Tuesday January 22. After that the Indications head off to mainland Europe. The venues will supply all the details.

In the meantime we humbly suggest that sneak previews of ‘American Love Call’ reveal that the 12 tracker is shaping up to be one of 2019’s first BIG albums. It’s a lovely, pastiche free contemporary take on the classic soul idiom – we can point you to a magnificent ‘Court Of Love’ for starters, but there’s a plethora of quality here. Interestingly too, despite their name – DURAND JONES and the INDICATIONS – the band boasts two lead singers – Mr Jones and the drummer Aaron Fraser; one a gruff tenor; the other a sweet, trilling falsetto – a perfect and classic soul pairing. Full review of the album here at SJF very soon.