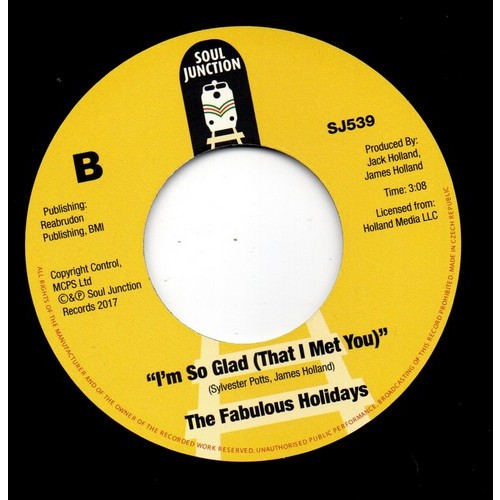 There have been a number of soul groups using the name THE HOLIDAYS, but one of the most consistent hailed from Detroit and began their career in the 50s. Led by James Holland they recorded for a host of local labels. In 1969, James recruited his brother – the sax man Jack Holiday, Maurice White and former Contour Joe Billingslea to form the “New” Holidays.

In 1972 the group formed their own label, Marathon and the first release was the double A side, ‘I’m So Glad’/’Too Many Times’. To make things a little confusing though, they now billed themselves as The “Fabulous” Holidays. With various personnel changes, the Holidays continued to record and enjoyed moderate local success with songs like ‘Getting Kind Of Serious’ and ‘You Make Me Weak’.

Holidays’ records are now, of course, hugely collectable and to meet demand SOUL JUNCTION Records have just released a new 7″ vinyl on ’em. The disc couples the energized ‘You Make Me Weak’ with the less frenetic – though still eminently danceable – ‘I’m So Glad’. The former zips along with real pace while the latter is a little smoother and smothered with Impressions/Esquires style harmonies. Both songs featured on the Soul Junction ‘Getting Kind Of Soulful’ album, though the version of ‘You Make Me Weak’ on this single is a different take.