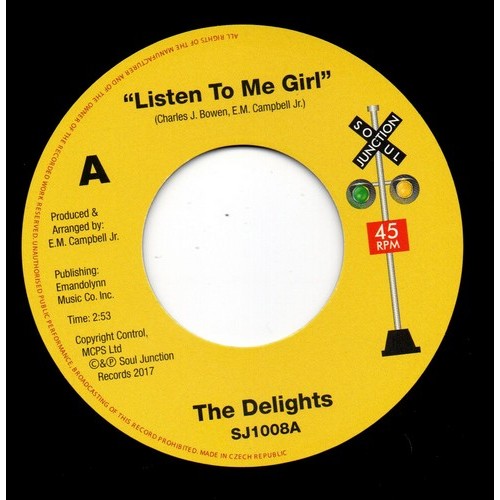 THE DELIGHTS were an obscure 60s groups that comprised brothers Keith and Ellis Hill, their cousin Jaime Hill, an unknown fourth and a youthful lead voice, Peaches. The Hills’ cousin was Philly record producer Manny Campbell and in ’68 he had the young Delights record a sweet soul ditty, ‘Listen To Me Girl’. For whatever reason the record was never released until it appeared relatively recently on a Coastal Records compilation CD. The cut provoked loads of interest and so the ever-obliging Soul Junction Records have just released it on lovely 7″ vinyl.

‘Listen To Me Girl’ is a busy, bustling, crisp 60s dancer with the lead vocal switching between one of the male group members and Ms Peaches. It reminds me a lot of the wonderful Esquires, save, of course, for the female lead.

Individual members of the Delights did go on to sing bvs for Philly groups like the O’Jays, the Delfonics and the Stylistics; then in the mid 70s a group of “Delights” recorded two singles for Phil-LA of Soul.

Given the paucity of Delights tracks, the Soul Junction team found it hard to unearth a B side to the release, so they’ve opted for something a little different, though still a Manny Campbell production. The cut they’ve selected for the B side is a proper modern soul anthem… TEARRA’S ‘Just Loving You’. The song was recorded in 1980 in Atlanta and was the B-side to Tearra’s second single for Midtown records. Only 500 copies were ever pressed (some credited to Teah Louise, Tearra’s real name) but in time-honoured fashion ‘Just Loving You’ became an in-demand, modern soul anthem (and rightly so)… hard to find, till now! It’s a delight… like the Delights’ tune!