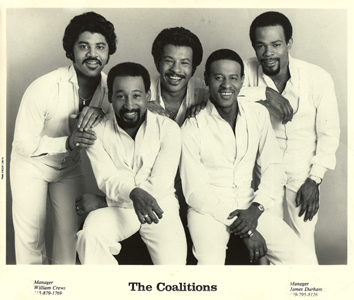 The COALITIONS were a Philly soul group whose story begins back in 1966 when WILLIAM ANTHONY ANDERSON, using the name LITTLE TONY TALENT, cut a single for JUGGY MURRAY’S New York based Sue label. Then in’67 he teamed up with VAN McCOY for a single on Vando. Neither effort meant much and the young TONY (he was just 15!)went back to Philadelphia where he formed a group – THE DELTONES

Confusion with the DELFONICS led to a name change and so the COALITIONS were born. In 1974 they recorded a single called ‘How Are You’ for the local Re Dun label which was later picked up by the Phil. L.A. Of Soul label. A second single followed but it quickly followed the first into obscurity and the COALITIONS appeared to flounder.

In 1980 – with a line up TONY TALENT, ALAN WILLIAMS, BRUCE FAUNTLEROY, MILTON WILLIAMS and STEPHEN FERGUSON – the COALITIONS scraped together enough money to record an album – ‘Colour Me Blue’ –as a vanity project. Though the full set was recorded, they just didn’t have the financial wherewithal to get the LP released … till now!

The UK’s SOUL JUNCTION records have just picked up rights to the album and as a taster they’ve released a delicious vinyl single on the COALITIONS. The A-side is a sweet mid-tempo Philly delight, ‘The Memory Of You’. It’s busy and bright with a full production and great vocals. It begs the question as to what might have happened if the COALITIONS could have secured a deal back in the day. The B-side is a much faster item. ‘On The Block’ fairly zips along and vocally it’s a real ensemble effort. Both sides are included on the album, ‘Colour Me Blue,’ which will be available on SOUL JUNCTION very soon

For more details go to www.souljunctionrecords.co.uk