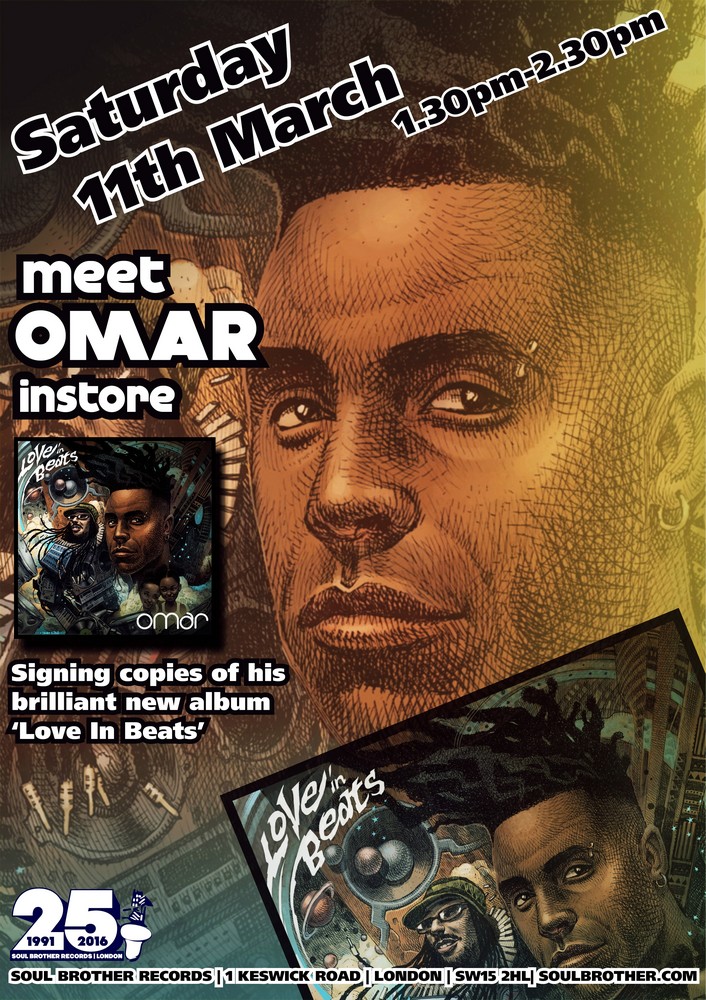 British soul fans will have an opportunity to meet and get their records signed by UK soul veteran, OMAR, this coming Saturday (March 11th), who will be visiting Soul Bother’s Putney store in London between 1.30 and 2.30 pm.  OMAR’s latest album is the critically-acclaimed ‘Love In Beats,’ released on the Freestyle label.

Soul Brother have also just released two ‘Rare Groove’ singles on their own label. The first is a reissue of RITA WRIGHT‘S in-demand Jet double-header, the Steve Royal written and produced ‘Touch Me Take Me’ b/w ‘Love Is All You Need’ from 1978. This isn’t the same Rita Wright who became Syreeta. Original copies of the single on the United Artists-distributed Jet imprint go for up to £300 but you can pick up Soul Brother’s repress for a tenner. The silky mid-tempo ‘Touch Me Take Me’ was previously issued by Soul Brother on their ‘The Wants List’ compilation.

The other 45 they’ve just reissued brings together  the collectable ‘Idle Hands’ and ‘Seeds Of Life,’  originally issued on Roulette in 1971 by the percussion-driven Latin funk/soul band, HARLEM RIVER DRIVE, an aggregation fronted by Charlie and Eddie Palmieri. Legednary sticks man, Bernard Purdie, plays drums on the two tracks while Randy Brecker features on trumpet. On this release, the full-length album version of ‘Seeds Of Life’  appears in a 45 format for the first time. This ace single – which sounds like a cross between Azteca and Tower Of Power – can be picked up for £10 and is out now.

For more info go to the Soul Brother website: http://www.soulbrother.com/