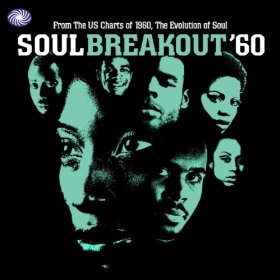 Fantastic Voyage Records are about to release the third in their wonderful ‘Soul Breakout’ series… and it’s not journalistic hyperbole to say this 60 track, 2 CD collection is the best yet. The reason is simple. The series is intended to show the evolution of soul music, and this new collection focuses on 1960 – the year that soul really began to crystallise.

There are plenty of tracks from soul’s three acknowledged founding fathers – RAY CHARLES, JACKIE WILSON and SAM COOKE and other big names featured include IKE AND TINE TURNER, JAMES BROWN, THE DRIFTERS, BEN E KING, JERRY BUTLER, CLYDE McPHATTER, BROOK BENTON and even a young ARETHA FRANKLIN who weighs in with a truly soulful ‘Today I Sing The Blues’. There’s also a smattering of early Motown – including THE MIRACLES’ ‘Shop Around’ and BARRETT STRONG’S ‘Money’.

As ever with collections like this it’s often the less well known items from the minor league players that bring the real pleasure. Here, for instance, there’s stuff like ‘Clap Your Hands’ from THE WHEELS, BABY WASHINGTON’S ‘Work Out’ and TY HUNTER’S ‘Everything About You’ and any compilation that includes BOBBY BLAND’S masterpiece ‘Cry, Cry, Cry’ demands serious investigation.

The same label, by the way, is releasing a fantastic 47 track JAMES BROWN retrospective. The set – dubbed ‘I’ll Go Crazy’ – features every track released by BROWN between 1956 and 1960… but you’ll have to wait till February for that. Full review soon on SJF.