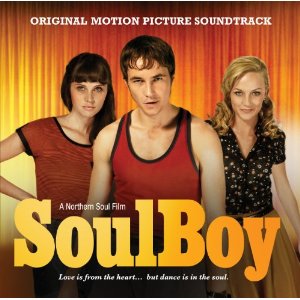 ‘Soul Boy’ is the title of a brand new British movie, due to hit cinemas very soon. The film is set in 1974 and takes place (chiefly) in Stoke On Trent and Wigan. The story’s heroes are Joe and Russ (played by MARTIN COMPSTON and ALFIE ALLEN) who, when they become involved with feisty hairdresser Jane (NICOLA BURLEY), get caught up in the magical (and sometimes seedy) world of Northern Soul. The new musical passion of JOE puts his relationships to the test and forces him take some difficult decisions.

The film is supported with a breathtaking soundtrack of 50 Northern Soul classics from the likes of AL WILSON, the DELLS, GLORIA JONES, JACKIE WILSON, BARBARA RANDOLPH and DOBIE GRAY. There’s also a brand new recording of ‘On A Magic Carpet Ride’ from GABRIELLA CILMI.

It remains to be seen whether the SHIMMY MARCUS-directed movie authentically recaptures the authentic feel and atmosphere of the Northern scene, but the music is certainly bob on.

The ‘Soul Boy’ album is released at the end of August on Universal Records while the movie is due very soon – watch your local press and listing sites for details.